A truck driver who was worried he could not complete a delivery from Massachusetts to New Jersey and back without violating federal safety regulations and putting himself and other drivers at risk came up with his own solution to make the delivery on-time while complying with regulations. His employer, NFI Interactive Logistics Inc., fired him. 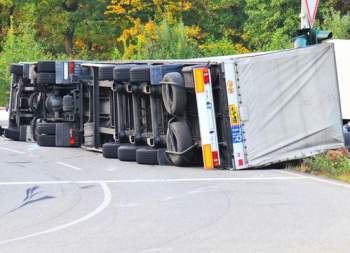 By firing the truck driver for following safety regulations, the trucking company violating anti-retaliation provisions of the Surface Transportation Assistance Act, according to an investigation by the Occupational Safety and Health Administration (OSHA). OSHA ordered the New Jersey-based company in June to reinstate the driver and pay him over $276,000 in back wages and damages.

The driver was assigned to deliver cargo of bottled water from Northborough, MA to Jersey City, NJ on August 12, 2012. Severe storms, floods, and heavy traffic delayed his trip. Believing he did not have time to complete his delivery and return home without violating hours of service restrictions, he delivered the load to a closer facility in New Jersey.

NFI objected to this alternate delivery and arrangements were made to have a different driver deliver the load to Jersey City. The load was delivered and the truck driver returned home without violating hours of service regulations or posing a risk to other motorists, but he was fired for insubordination the next day.

The driver took the next step of filing a whistle blower complaint with OSHA, which investigated and found the trucker “found a way to do his job and ensure motor carrier safety.”

In a statement, Kim Stille, the New England regional administrator of OSHA, said, “Rather than receiving credit for doing the right thing, he received a pink slip. The law is clear: Drivers have the right to raise legitimate safety concerns to their employer — including refusing to violate safety regulations — without fear of termination or retaliation.”

NFI was ordered to immediately reinstate the driver, pay $126,870 in back pay and interest from August 17, 2012 to June 7, 2016 when he was reinstated, pay $50,000 in compensatory damages for emotional distress and humiliation, and pay $100,000 in punitive damages and cover attorney fees.

Truck drivers face a great deal of pressure to ignore safety regulations to deliver cargo on time, even though these safety regulations are designed to not only protect drivers but also the public. If you or someone you love has been hurt in a truck accident or you are a trucker injured in an accident, contact Edelstein, Martin & Nelson for a free consultation with an experienced Delaware truck accident attorney to discuss your case.

A truck driver following the rules of the road was fired because he did the right thing and stopped to rest, and when he did, he missed the scheduled delivery that was impossible to meet without breaking the OSHA rules and law.